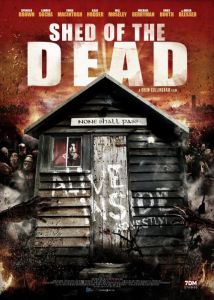 7DM Studios, in association with Oceanstorm Films and Williams Bulldog Management, are excited to announce that their riotous new zombie comedy, Shed of the Dead, will be having its World Premiere at this year’s SCI-FI-LONDON Film Festival on 18th May at Stratford Picturehouse, and will be available on Digital Download release from 20th May.

Witness the hilarious and grisly journey of Trevor, a 30-something man-child and war-gaming enthusiast, and his best friend, Graham, as they attempt to survive the zombie apocalypse.

The film features a host of British talent including Spencer Brown, Lauren Socha(Misfits), Emily Booth (Doghouse), and Ewen MacIntosh (The Bromley Boys, The Office). In addition, British actor Brian Blessed will be lending his unmistakable booming vocals as the film’s narrator. The film also features US horror icons Kane Hodder (Friday 13th, Hatchet), Bill Moseley (The Devil’s Rejects, Halloween), and Michael Berryman (The Hills Have Eyes, One Flew Over The Cuckoos Nest).

Shed of the Dead producer, Nicholas David Lean, has said “We’re all delighted to finally be able to showcase Shed of the Dead at SFL to fans of independent British comedy horror. We hope you all have as much fun watching it as we did making it!”

An ‘urban fear’ grips the tenants of an inner city allotment when the long-predicted apocalypse finally arrives. Gardeners, of all levels of green-fingered ability and produce-preference, are afraid to venture onto their plots, especially late at night. And even then, when they can summon enough courage to so do, there is no safety in numbers. For the dead have risen from the depths beneath the cabbage patch, and the rows of sweet pea, hell bent on mischief, mayhem and consumption of the living.

Only the nimble fingered “figurine war-gamer” Trevor, aka ‘Casimir the Destroyer’, and his best friend Graham, the knightly “Sir Brandt”, stand between the devilish hordes of undead and the salvation of mankind – well at least in their alter-ego fantasies they do. Until, of course, one dark night as they look beyond the confines of Trevor’s little wooden shed, they discover that the world has truly fallen into the hands of the undead – particularly Trevor’s allotment tenant neighbours. Now Trevor must venture into the unknown to save his wife, Bobbi, and her ‘capricious’ friend Harriet, from a world gone to chaos. And in so doing, become the hero he has always fantasised he was.

Special guests from the cast, Spencer Brown, Emily Booth, Lauren Socha and Ewen MacIntosh will be attending the Q&A at SCI-FI-LONDON Film Festival on 18th May. Tickets will be available through sci-fi-london.com